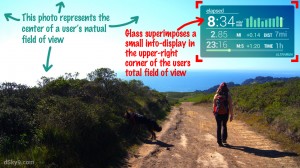 There is a lot of confusion in the marketplace about the role of Google Glass in augmented reality, which is as much Google’s fault as anyones. What few people understand is that the initial Project Glass launch video, ‘One Day’, was a concept video, akin to Apple’s seminal Knowledge Navigator from 1988.

Here are some clarifications to bring expectations towards reality:

No. True augmented reality requires a concept called registration, whereupon information and synthesized visuals are overlaid atop reality in real-time. Optimally, when the user shifts the orientation of their head, the synthesized image pans and tracks with these motions with near-zero lagtime, producing the illusion of magical realities overlaid directly atop of a waking reality. These types of applications require significant processing power in terms of both computer vision processing and graphics rendering. Glass apps and services are called from the cloud, thus introducing network latencies that make it nearly impossible to produce valid AR experiences. Glass is, instead, a mediated reality platform. It injects snack-sized pieces of information into the users perception, optimally at relevant and useful moments of their lives.

2. Does Google Glass give a full field of view experience?

No. Glass posits a small semi-transparent screen of information in the upper right of the users natural field of view. It only displays this information to one eye. The actual field of view is probably something close to 5 degrees. In otherwords, given the classic 180 degree circle of perception emanating from your eyes, the glass display occupies less than 5% of that space.